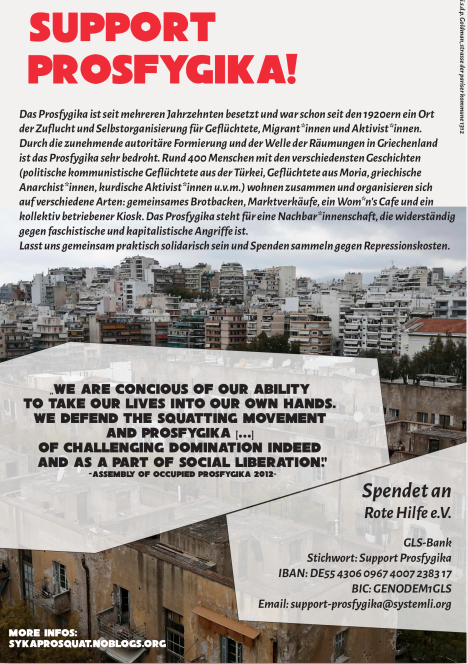 Prosfygika has been occupied for several decades and has been a place of refuge and self-organization for refugees, migrants and activists since the 1920s. Due to the increasing authoritarian formation and the wave of evictions in Greece, Prosfygika is very threatened. Around 400 people with diverse histories (political communist refugees from Turkey, refugees from Moria, Greek anarchists, Kurdish activists, and many more) live together and organize in various ways: communal bread baking, market sales, a Wom*n’s Cafe, and a collectively run kiosk. Prosfygika stands for a neighborhood that is resistant to fascist and capitalist attacks.
Let’s be together in practical solidarity and collect donations against repression costs.

“We are concious of our ability to take our lives into our own hands. We defend the Squatting Movement and Prosfygika (…)
of challenging domination indeed and as a part of social leberation.”