Informations from the perspective of Sy.Ka.Pro

The new season started in low-tension conflictuality with the government despite the fact that during summer huge fires burned one-third of Greek forests. And this destruction clearly occured with the responsibility of the government.

In our squatted community of Prosfygika, on Alexandras Avenue, we run an intense campaign against the repression and gentrification of our neighborhood. We organized several info-events in squares for people to know that the state and the companies want to kick out hundreds of people from the communities houses.
On 5th October, we intervened to the leftist former-government radio station Kokkino and newspaper Avgi with the target to make them publish our statement. We specifically target this party because it is one of the main actor of the gentrification process, pushing the state mechanism to forward its plans. 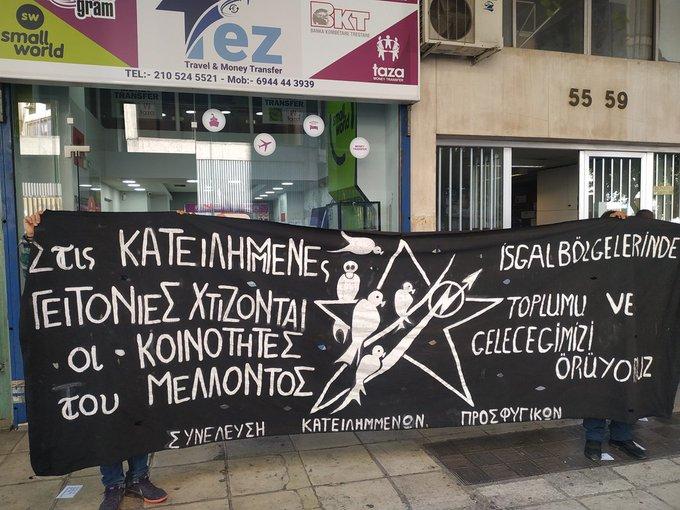 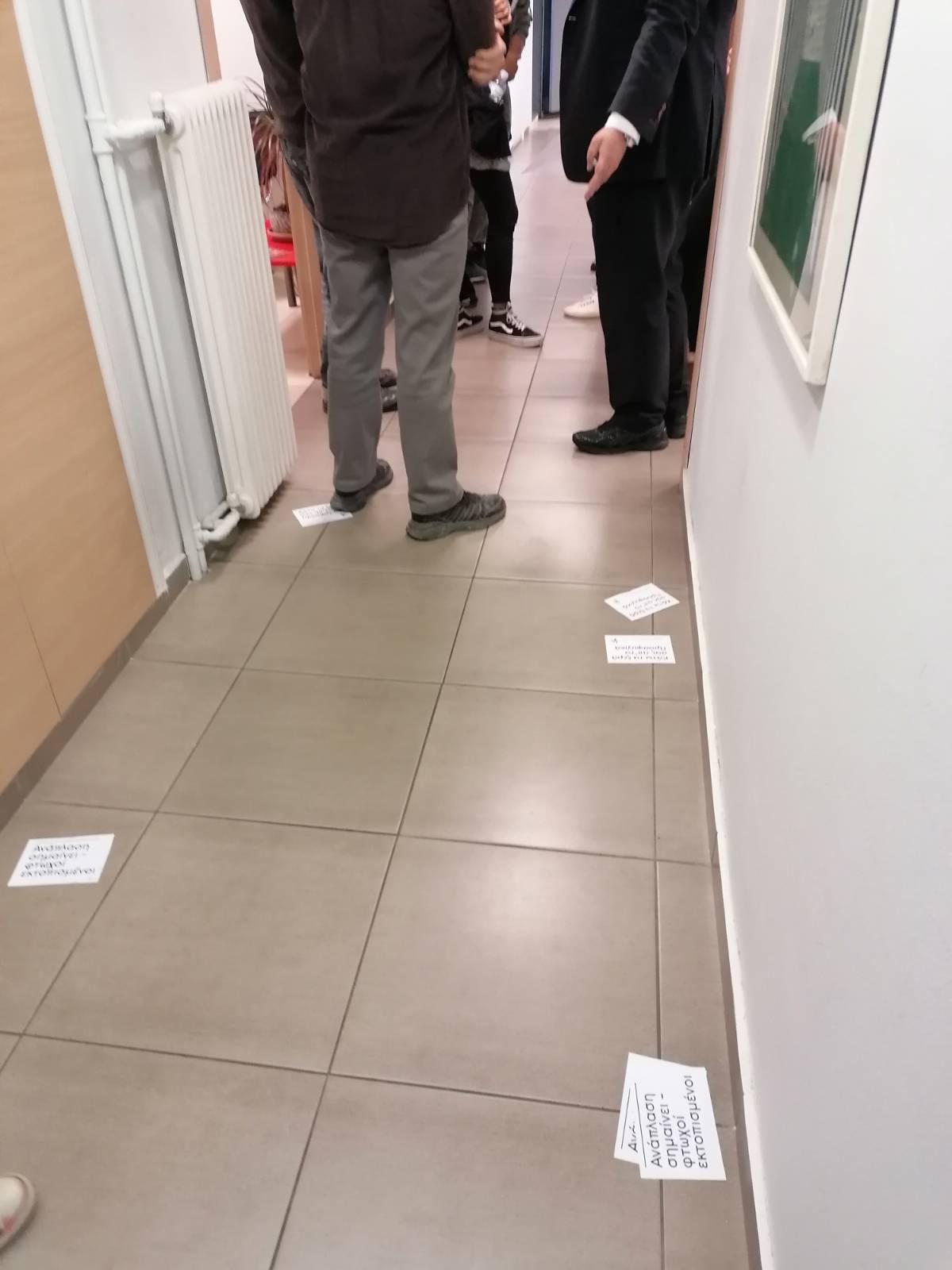 The intervention in Radio Kokkino lasted two hours to make them broadcast our statement on the news.

We also intervened on 14/10 to the main company owning the technical responsibility: Anaplasi ΑΕ (Aνάπλαση Α.Ε.) having as a president the mayor of Athens Kostas Bakogiannis. After our interventions “a crew” of Syriza officials, ex-president of Anaplasi A.E., wanna be athens mayor, and ex regional president came to our neighborhood to make research to prove that the neighborhood needs gentrification.

This first period of campaign ended up October 16. with a demonstration from our neighborhood to the wider area of Ambelokipi. Even though we were not so numerous, we managed to follow a big route in central streets with full guarding equipped with helmets, sticks, gasmasks. Lately, a new law is getting imposed in Greece which is not allowing protestors to take the whole street but confining them to one street-lane or even in some cases to the pavement, surrounded by riot cops pressuring them. So the demonstrations became very tense.

This campaign is a small preview and a warning addressed to the state, of what will happen if they attack to our neighborhood.

At the same time, another anti-repression campaign was going on “against the obligatory DNA capture” also known as the case of the “14” with the general slogan “sabotage the state data”.
Last year, anarchist students were arrested because they occupied a building of the Zografos University to protest against the lockout of Polytechnio. The police stated that they found in the squatted building a beer bottle with a male DNA samples matching another sample gathered after one of the 6 December 2014 the attack of cops. With the excuse of this ridiculous connection, they want to oblige the 14 arrested males comrades of the occupation to give their DNA. Denying it, they are now under the threat of arrestation.
Based on this case, the anarchist movement, and especially the student part of it, launched a campaign with aggressive actions and public informative events. For the end of the campaign, we commonly organized a demonstration that should pass by all the univerisities of the Athens center. However, the demonstration was directly attacked by the riot cops with beatings and tear gas.

Our comrades participating in the guarding try to resist and 6 of them got arrested, including two of our comrades from Sy.Ka.Pro. Right after, the cops got attacked from a building of private education and then they broke the glass-windows of a printing shop injuring the people who were inside.

As it seems, 4 of the cops where injured. The main part of the demostration ended in Polytechnic University where people made some fuss, trying to provoke some riots. But this occurred more successfully in the Financial University ASOEE. 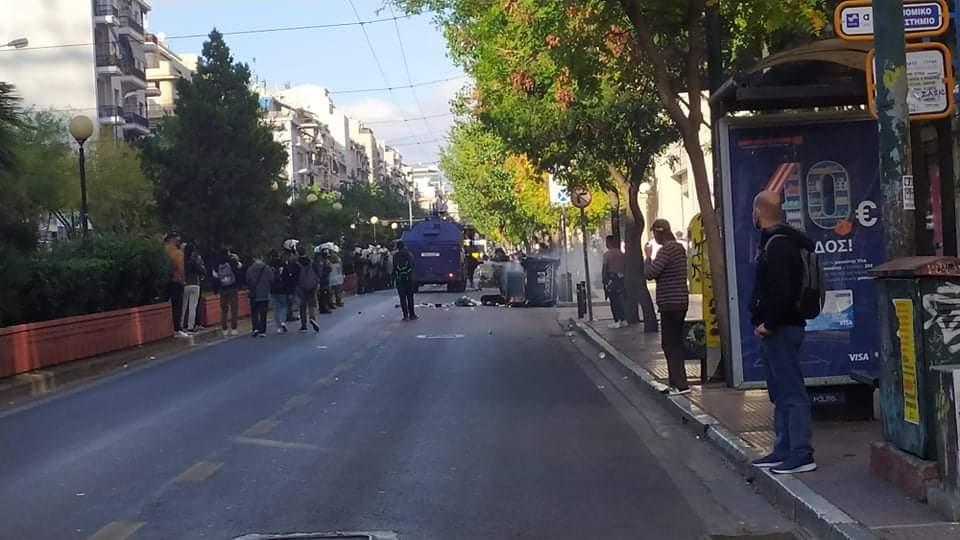 Our comrades are still free and the arrested ones got released after a night in detention cells. The campaign for DNA now is going beyond the 14 students because more and more militants are getting arrested with the same fictional cases and excuses. Before the case of 14, it was the case of 8 students of ASOEE.

At the same time, the police murdered an 18 years old person in Perama because he attempted to escape with a stolen car. None of the cops involved in this assassination got convicted with jail sentence or serious charges. The Romani’s community that this person were belonging answered with clashes all around the region of Attica. The anarchist movement also tried to react but the repression was very hard. The only good example of resistance was a fire attack on Zografou police station. For the moment, this state murder did not maintain a central place in the movement’s agenda.

In the same context, the accusation for “possession of molotov” turn into a felony (a high charge) through a new law which was amended. Already two persons went sent to jail after an attack to a police station in the neighborhood closed to the place that the young Roma was murdered.

As the last information, we can report the action days which happened for the anniversary of Polytechnio from 15 to 17 of November, the dates of the antidictatorship insurrection on 1973. A coordination of radical groups, among them students teams as well as our community, decided to occupy a historical building inside Polytecnic university, known as Gini. For the last decade, Gini is the central place for anarchist, antifa and others anticapitalist groups to organize themselves in Athens. Last year, using the excuse of Covid19, the government kickout migrants who were living there on a urgent need. Then, they barricade the building to forbid the access to all the parts of the movement. At the end, the access to the whole Polytechnic University was fordidden as the celebration was cancelled. This present year, we occupied the building of Gini during the three days celebration. We organized two days full of events and we guarded the building and the whole University against the police, being ready for a massive violent conflict in case of invasion.