Solidarity with the Uprising in the USA

Shopping Mall entrances are guarded by the tan fatigued soldiers of the national guard. Once you enter you can’t leave, you must shop forever. Parks that one couldn’t have imagined a demonstration in are now the gathering point for a riot, the slogan that rings above the crowd is a call of “Abolish the police!”. 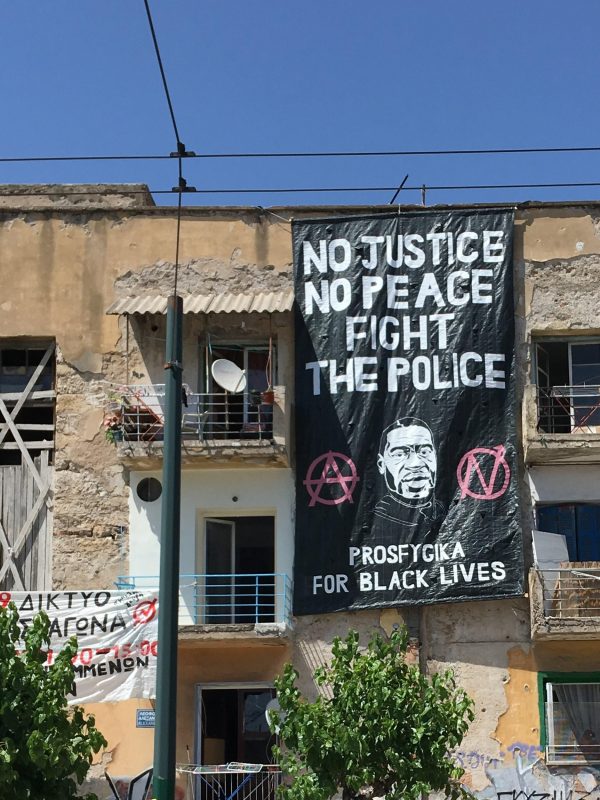 Even though one is facing down an army there is a clear sense of hope, as if this fucked up murder had finally wiped away the fog of ignorance, inaction, and fear. Suddenly one can talk to anyone in the street. The society which had ignored this problem, despite the cries of a people institutionalized, murdered, and kept in ghettos, has finally allowed itself a mirror.

Everyone outside seems to have chosen a side, with the cops or against them. Since its inception America has been a project founded on racism. First based on the theft and murder of the indigenous people who lived on Turtle Island, and then based on the chattel slavery of the trans-Atlantic slave trade. In this muck of violence and racial domination, the institution of policing was born.

Since then, the police in the US have been an example of racial discrimination, insane incarceration practices, white supremacist violence, and the enforcers of a brutal class monopoly. With the murder of George Floyd the situation has changed, the years of brainwashing and manipulation imposed on the population through mis-education, propaganda, and fake-history has been lifted. Finally reality seems to have shattered the screen of spectacle. We look on in amazement and pride that the people of the US are fighting against one of the most powerful police apparatus’s to ever exist in human history. We feel solidarity in our hearts as we recognize the struggle they are undertaking. We feel rage as the same types of police injustices there are enacted here. We are the squatted project called Prosfygika, which houses 500 people from every walk of life. Black, brown, refugee, migrant, anarchist, we all work here for a common struggle: that of making community.

Greece suffers from the torments of racist policing, where migrants are stopped on-sight, and moved silently to prisons and concentration camps just because they came from the wrong place or because they didn’t have the right scrap of paper. People are disappeared from the streets, or forced into the black market, or killed inside of police stations, all of which are enforced and perpetrated by the racist police system. Racist police violence is rampant, and is one of the reasons why our squatted housing project is under threat. We call on all to act in solidarity with the people of the USA, and to act where they are: in the same struggles the people in the US are fighting in. Against racism, white supremacy, the injustice of a system which necessitates prisons, and police and state violence. We stand in solidarity with the struggle for black liberation in America and throughout the world. We stand against the police in all of their manifestations. We stand with all people who take their life and their world into their hands in the struggle for freedom.

On Tuesday 9th of June, we dropped a banner in solidarity with George Floyd and all of those fighting on the 1st block of our squatted community on Alexandras Avenue. Rest in Power George Floyd! We won’t let your death be in vain! Abolish the Police! Destroy State, Capital, White Supremacy, Fascism, and Patriarchy! For Freedom, Self-Organization, and the Power of the People!