Intervention & Words of Solidarity to our fighting comrades in Turkey

Today the Turkish government is deciding about the acceptance or rejection of the Convention of Istanbul. This convention could be a step towards a more fair and maybe a less violent “system of justice” in the nation state of Turkey. Through resigning the convention the justice system in Turkey would not be forced anymore to keep at least the minimum rights of women. Which are the basic human rights like the right to personal and physical integrity. In Turkey, every third day a women gets killed because she is a women. The rate of violence against women is rising through the continues development towards a totalitarian fascist regime. Fascism and violence against women and LGBTQI* had been mostly connected in history. If Turkey is not signing the Convention, the regime is once again showing us its inhume and fascistic face.
We are standing side by side with our comrades against repressive and misogynist laws and the nation states which implements them. We appreciate the fight of our comrades in Turkey for all this passed years and it gives us strength and force to see all this powerful and successful movement for our fight we have to enforce all over the world.
We send you our deepest solidarity and power for the continuity of the fight for our rights.
Faşizme karşi omuz omuza! 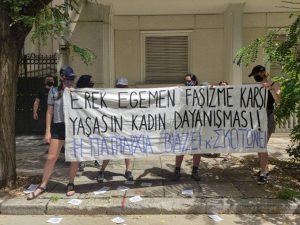